Login With Facebook
or
Source: Porto., All rights reserved

Few become indifferent when a tram passes by. It's not just because of the characteristic sound, the way it glides on the rails, or the long connection to Porto's identity. This vehicle is much more than a means of transport, it's a piece of history running through the city's streets, a heritage object that can be touched, and that welcomes us inside. The trams started running again in April, after a halt due to the pandemic – a longed return by Sociedade de Transportes Colectivos do Porto (﻿﻿﻿﻿﻿﻿STCP﻿﻿﻿﻿﻿﻿), and celebrated by the most loyal passengers, but also by those who visit the city and live the experience for the first time.

Riding a tram is like traveling in time – it enables us to see in colour what we have seen in black and white photographs. In September, it will be 126 years since the first tram ride in the streets of Porto, a relationship that has survived wars, regime changes and other historical events. Only the Covid-19 pandemic forced an unprecedented halting of these vehicles: a few months in 2020, and again earlier this year, until April.

“[Halting the trams] was not an easy decision. But we must not forget that the city was empty, the instructions people had, were to stay at home, not to be outside. The company's concern was to guarantee mobility to all those who really had to leave their homes for work. And the tram, although it also falls within this function, has buses that take similar routes”, emphasises the marketing director of STCP, Manuela Ribeiro.

The return to the rails was a long-awaited moment, admits the director of the ﻿﻿﻿﻿﻿﻿Tram Museum﻿﻿﻿﻿﻿﻿. “Everyone missed them a lot. The tram drivers and also the museum staff were eager to return. The tram is a more tourist service, which somehow shows what is beautiful about our city”, says Manuela Ribeiro, stressing that passengers are not limited to those who come to visit Porto: “It is a means also used by the people of Porto. Having local citizens and tourists riding together is part of the city.”

Driving a piece of history

Paula Regalado is one of the faces that welcomes local passengers and visitors to the city on board the tram. A tram driver for 18 years, she acknowledges that her job implies driving a piece of history through the streets of Invicta: “It is to convey a little bit of Porto's image to all users, both Portuguese and foreign. It is one of the greatest memories they take from the city.”

The memories go with those who travel on the tram, but also with those who see it pass by and capture the moment with a photograph. It catches the eye of those enjoying the sun on the terraces, and those passing by on a bicycle or on foot. When the vehicle comes to a standstill, it does not take long for the tram driver to be approached by tourists eager to try travelling on board.

“They ask a lot of questions. About the year the tram was built, if there are more lines... tourism has now increased a little, but before that there were already many Portuguese, particularly from the city, travelling. They missed it and are quite happy with the return of the trams, because there are people who are used to riding it daily”, says Paula Regalado. The interruption of service “was a difficult period”, admits the tram driver: “It is hard not being able to be with the passengers. For the regulars, who reside in Porto, it caused an inconvenience to them. They missed the tram, the noise of the tram.”

The moment of resuming the trams’ service marked Paula Regalado's reunion with passengers and with the panoramic views that are part of some routes. “We all drive all the tram lines, but I particularly like the tram line 1, on the coastal avenue”, which connects ﻿﻿﻿﻿﻿Infante D. Henrique Square﻿﻿﻿﻿﻿ to ﻿﻿﻿﻿﻿Passeio Alegre Garden﻿﻿﻿﻿﻿. “The scenery is better, I really like to see the river”, adds the tram driver, concluding that this “is the route most sought after by tourists, while the tram that has more locals, is the 18th (circular Massarelos-Carmo).” 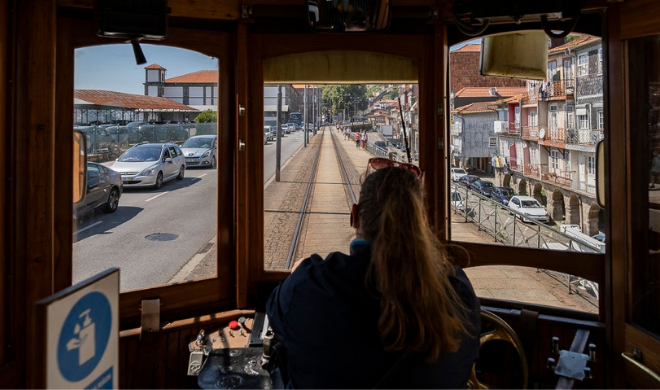 “We were determined to try it out”

Not even the face masks hide the delight of Lorena and Mario when getting off the tram in Batalha. Once the trip is over, the tourist couple from Barcelona take the opportunity to take some more photographs with the vehicle.

“It was very beautiful, I liked it a lot. It's something that we do not have in our country, so we were curious to come and try it out”, confesses Mario. “Trams are, without a doubt, one of the charms that Porto has. It was one of the things we were keen to try on our visit, it was even decided before we came. We have family and friends who had already been to Porto and who told us about the trams. In this city, trams are unavoidable, and that is why we had already decided to try it”, adds Lorena, ending: “It was a very beautiful and impressive trip.”

The route on tram line 22 (circular Carmo-Batalha) left the Spanish visitors wanting to go on at least one more trip on Porto's tram rails, admits Mario: “We still want to try tram line 1, which runs along the coastal road. We have also heard great things about that route. And yesterday we rode the Funicular dos Guindais.”

Meanwhile, the tram leaves for another trip. It moves away from us with its characteristic sound, a kind of hum that makes us turn our heads to look. It has been like that in Porto for over 125 years. 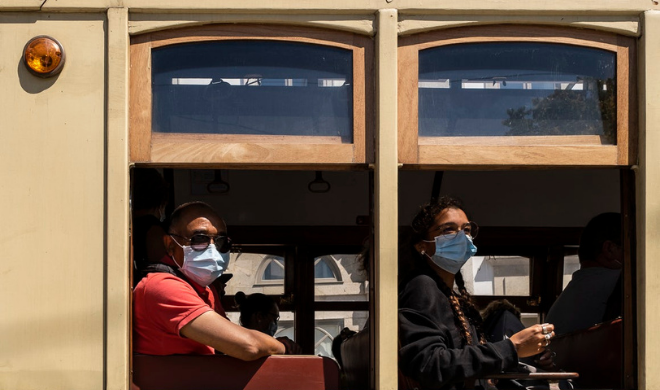