Make the most of this city in one day!

If you want to see Porto but you don't have much time, here is an itinerary of what you shouldn't miss and can be done in just one day. This is our suggestion, so that you can make the most of this city, knowing that you would need 3 days at least to really know it better. We are sure that after this day you will want to come back to Porto as soon as possible to enjoy all its venues and monuments.

Porto puts the world before you within walking distance. Here on every corner you will find examples of the most varied architectural styles and fall in love with a city where the charm of other centuries blends with the best that our modern days have to offer.

There are many ways to get to the city of Invicta, so we only give you a summary of the extended transport system that serves the city. We suggest that you get the Porto.CARD, which allows you to save money and gives you over 170 benefits and discounts. To make your visit even more comfortable, there is an option that includes transports. You can purchase the card at these locations, or online.

For your convenience, if you would like, our Tourism Offices can give you the best options for your visit, making all your bookings, if need be. In person, by phone, email or using Live Chat, our team is prepared to give you all the information for you to plan your visit.

We invite you to start out by taking the Yellow Line of the metro, headed towards Santo Ovídio, and getting off at the Jardim do Morro station. By doing this, you will go across on the upper deck of ﻿﻿Luiz I Bridge﻿﻿ from where you will have a spectacular view over the city, with its houses right down to the mouth of the Douro River. Walk to the bridge and let Porto invade your soul. Stand there for a while and take your time to observe and feel the atmosphere. This is the start of a day you will never forget. 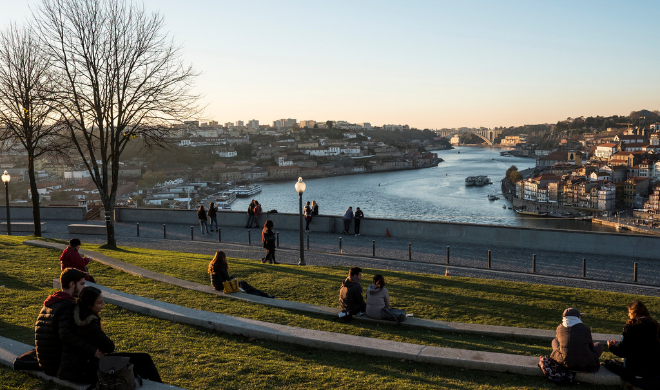 After taking the mandatory photos, set off to discover one of the symbols our city is best known for. Port Wine is something we are proud of and a visit to the Cellars is a must-go! You will find them on the left bank of the Douro River, on the Vila Nova de Gaia side of the river. With the Porto.CARD we mentioned earlier you will get a discount on your admission ticket to the cellars: 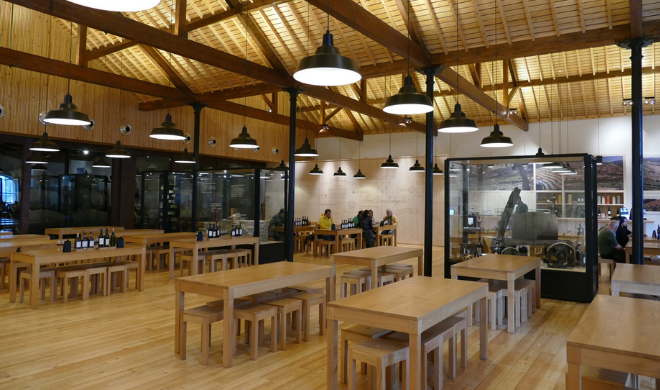 To really get to know a city, you have to walk along its streets, to feel the soul of its people. As you leave the cellars, the magnificent ﻿﻿﻿﻿﻿﻿﻿﻿﻿Luiz I Bridge﻿﻿﻿﻿﻿﻿﻿﻿﻿, the work by disciple of Eiffel, invites you to go back to the city of Porto using the lower deck. Stroll leisurely, observing the beauty of both riverbanks.

Although Porto is being increasingly found on guidebooks all over the world, being chosen as the European Best Destination (2012, 2014 and 2017), it is still possible to experience and witness what it means to be a portuense (someone born in Porto). The children raised on the riverside area of Ribeira continue to believe that the wharf is still THEIR beach and they are not ashamed to prove it on the hot summer days.

Let yourself fall in love with this zone of Porto that is so characteristic of the city, where the buildings fill the days with colour. Watch the children playing, the women vendors with their aprons as always, the clothes hung out in the sun. This location was considered a World Cultural Heritage by UNESCO in 1996, was the site from which Prince Henry the Navigator sailed from towards his great adventure to the Conquest of Ceuta. It was here, too, that the French attempted an invasion on more than one occasion. Stay a while and breathe in the history. Strolling through the narrow streets is like embarking on a time machine…

If you wish, you can tour the city on a sightseeing bus that has a set route with several stops at the most important sites. Find out more here.

Impressed? Then get ready! We set off on a Bridges Cruise.

We're going to sail along the Douro, past the six bridges of the city, to see the contrasts, to feel the welcoming breeze, telling us that life goes on but there are memorable moments like this that become unique and memorable. Let the river take you on a trip that you will not want to miss, as it will offer you a privileged view of the two banks, making you realise that Porto extends beyond Ribeira, in a landscape where the green banks disappear languidly into the dark blue waters of the river. With Porto.CARD you can benefit from discounts on some of these tours. 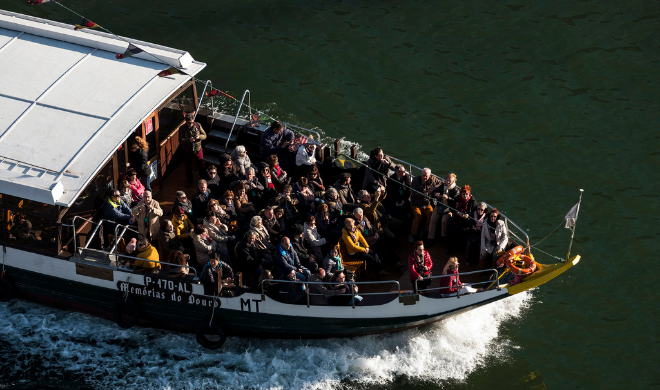 After a morning spent discovering the beauty of the riverside zone of Porto and sipping the nectar of the gods, Port Wine, it is time to sit down and enjoy a meal. The Ribeira zone has a vast area of restaurants and bars, with a very diversified offer.

You can't afford to miss specialities such as the famous “Francesinha”, or Tripe Porto-style, or Gomes de Sá Codfish. If you prefer something more refined, the city has lots of “Chefs” recognised for their talent, where you can try various dishes of Contemporary Cuisine... you just have to choose. 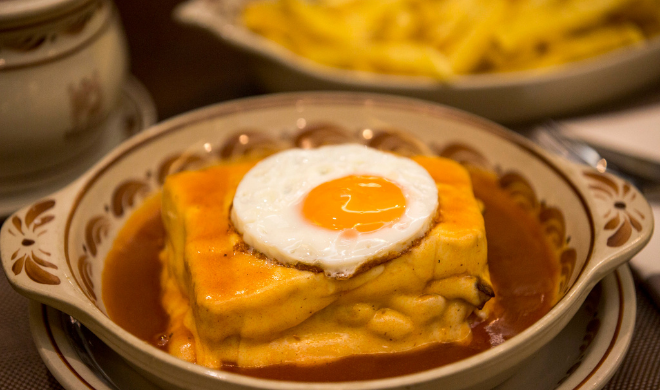 Now that you've recharged your batteries, are you ready?

Shall we set off on the second part of the day? We take the waterfront road towards Bridge D. Luis I. On the left side you will find the entrance to the Guindais Funicular that will take you up the slope along a route where you will be able to see the river and the ﻿﻿﻿﻿Fernandina Wall﻿﻿﻿﻿ that surrounds part of the city. If you bought the Porto.CARD, you can get a discount on the price of the ticket.

These are two unforgettable minutes during which you will be taken up to one of the most emblematic buildings of Porto. The ﻿﻿﻿﻿Cathedral﻿﻿﻿﻿ with its open doors welcoming you, is one of the best places from which to see the city. It's an imposing building and offers you one of the best views of Porto, this religious temple has survived throughout the centuries, which over time it was enlarged and renovated.

Take in the medieval spirit of everything you saw in Ribeira and the Cathedral. Porto is like that… The city itself will lead you through historical nooks that coexist right alongside contemporaneity. It allows us to walk in the 12th century breathing the 21st century!

We head towards the Aliados, the main avenue of the city and stage of innumerable parties. Along the way we stop to contemplate what was once considered one of the eight most beautiful train stations in the world. ﻿﻿﻿﻿São Bento Railway Station﻿﻿﻿﻿ has one of the most beautiful tile panels in the city. There are over 20 thousand blue-and-white tiles covering the enormous walls that form the entrance of this magnificent monument. Here you will be able to see scenes depicting Portugal's history and the lives of the Portuguese, as well as the evolution of the transport, as portrayed by Jorge Colaço, a 19th-century Portuguese painter.

Take the opportunity to walk around and marvel at some of the imposing buildings that surround it, such as the ﻿﻿﻿﻿City Hall﻿﻿﻿﻿, the political and administrative centre of the city. After that leisurely walk and because time is running out, it's time to go up again.

Head for ﻿﻿﻿﻿Livraria Lello﻿﻿﻿﻿, the place that is said to have served as the inspiration for the author of Harry Potter in the creation of Hogwarts. The waiting line may even tempt you to give up but don't make that mistake, the bookstore is worth waiting for. Enter and travel into a world of fantasy and adventure. So many pages, so many words, so many stories. Don't forget, if you decide to buy a book, you can always deduct the amount you paid to get in.

So that this one-day experience ends in the best possible way, there is nothing better than to issue you a challenge: go up the ﻿﻿﻿﻿Clérigos Tower﻿﻿﻿﻿. They say that reaching the top of the mountain is not what is important, but rather the way we take getting there. That being the case, so that the sight at the end of this day is a special one, it's worthwhile, we suggest you climbing the 240 or so steps that take you to the top of Porto's famous landmark. 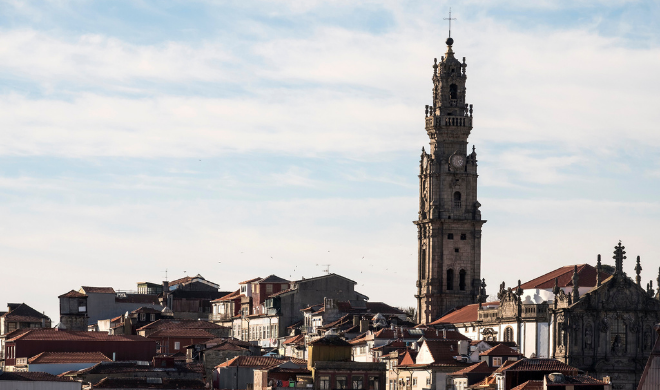 Did you take great pictures? Don't forget to share them with us! Tag your photos on instagram with #visitporto!

Well? Dazzled? That's the way Porto is. It enchants us at every step and sweeps us off our feet. It's like those we love and keep photos of and can never forget. The ones we love that will always be waiting for us with open arms the next time we visit, and never say no to us!

Porto is much more than this! Come back again! There's still so much more to see…​