Hoping for a promising 2021

Go away old man, you did poorly, we put all our hopes in the promising 2021

The original sentence dates back to 1972 and belongs to an illustration by Cruz Caldas eternalized in the daily paper “O Comércio do Porto” that year, but it fits so well in this 2020, that “Porto.” could not resist to borrow it and also go through some of the brilliant graphic drawings by one of the greatest Portuguese caricaturists and illustrators of the 20th century.

Biting criticism and shrewd humour were a constant in the illustrations by Cruz Caldas, a name that needs no introduction among the Portuguese who had the opportunity to follow his work.

Porto-born, António Pedro Barros Cruz Caldas was a contributor to the most popular newspaper in the city: “O Comércio do Porto”. Between 1966 and 1973 (two years before his death, in 1975) he was a regular on the pages of the newspaper - later closed, in 2005 - with cartoons on the most varied subjects.

Specifically, there was an illustration that achieved fame and honours of tradition, which timbre marked the goodbye to the old year and welcomed the new year. With each December 31st issue of O Comércio do Porto, readers expected to see the most exquisite sentences and cartoons by the graphic artist alluding to the New Year’s Eve, which never disappointed.

At the Porto Municipal Archive, “Porto.” found four examples, between 1969 and 1973. "Welcome, my boy, may 70 bring more broom!" depicting the New year’s Eve from 1969 to 1970. The chosen sentence was not at all alien to the controversy experienced intensely at that time: it alluded to the lack of cleanliness in the city. The theme even gave rise to other illustrations by Cruz Caldas, such as the one in which he used the statue “O Porto for a peculiar request for help. 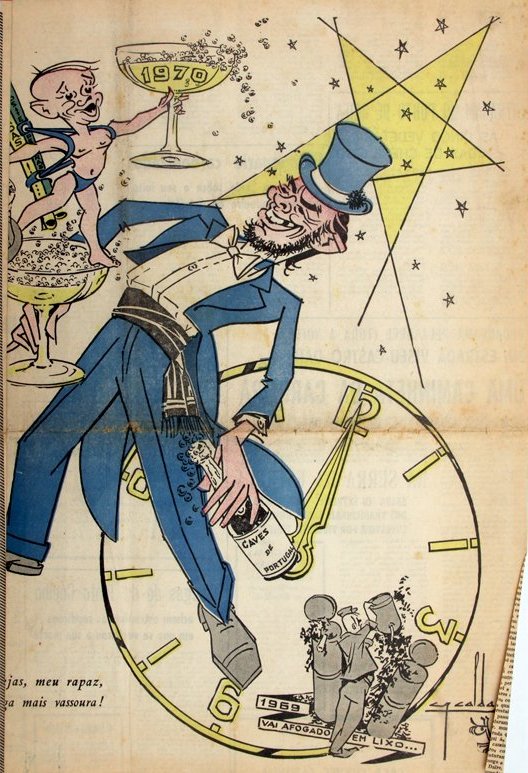 The following year, from 1970 to 1971, the illustration combined war and peace with exquisite irony. The figure of the dove brought peace - in all its letters - but it also carried the "New Year" on its thin back. This came with "a bag of projects and amazing promises" from the UN. At that time, the United Nations faced turbulent times, which endangered one of its main “golden rules”, keeping the peace. Worldwide, conflicts spread in a Cold War scenario. Also, internally, disputes with the Portuguese Government, due to the colonial issue, were frequent.

The third archive image - and this is where we stop ourselves - refers to the illustration of the New Year's Eve from 1972 to 1973 (the Municipal Archive of Porto does not have the previous year available and “Porto.” was unable to ascertain whether the copy missing in the chronology contained the well-known illustration by Cruz Caldas).

The suggestive sentence, “Zé: go away old man, you did poorly, we put all our hopes in the promising 1973”, accompanies an illustration with lots white doves, this time filled with several banners with the word “peace”. This main figure is “haunted” by the old man - who – is so old – does not affect the celestial picture, where he takes on a supporting role.

The Estado Novo’s regime, the oldest European dictatorship, was increasingly contested, while, from the beginning of the 1970s, the armed struggle of the separatists intensified. In November 1972, a resolution passed by the UN General Assembly recognised the legitimacy of the armed struggle in Africa against Portugal.

Today's situation is in no way similar to that time, but the truth is that the copy chosen by Cruz Caldas produces a fabulous parallelism with the year 2020.

There is also the creative exercise of thinking about what a poster designed by the graphic artist would look like in the light of the year that is now ending. Would it involve the virus image, the face masks and the alcohol-based hand gel? We will never know, but the imagination leads us to one of these possible scenarios.

Finally, there is still a record of the illustration that marked the New Year’s Eve from 1973 to 1974. “Ah, old man, thank you, don't bother. I know the way, because I come here every year…”.